You are here:
Posted on August 30, 2011
by JFCY volunteer Ouran Li and JFCY lawyers
Scenario
Charles Cheenie and Brookie Mules have divorced and have two children from their marriage, both under the age of 18. Charlie has more money than Brookie but has a history of drug addiction and infidelity. The Court has to decide with whom the children of marriage will reside, taking into account the best interests of the children.
The children, Martin Cheenie (age 6) and Denise Cheenie (age 16) lived in Ontario with the parents for five years before the divorce proceedings and moved in with Brooke when she filed for divorce. Charlie is now living by himself at a luxury condo downtown. Denise has taken the children to and from school and has cared for them during the marriage. The children love their father and are unaware of the ‘extracurricular activities’ he has engaged in because it has not affected their relationship. The children are confused as to why their parents are breaking up and are conflicted as to which parent they want to live with.
What are the legal rights of the children?
When spouses separate and begin divorce proceedings, serious issues for determination include where the kids should live and who should make decisions about their schooling, health, etc.  These issues are often agreed upon between the parties and resolved out of court.
However, if the parents cannot agree between themselves, a Court will eventually make an Order about “custody and access”. This is when the Court decides who the “custodial parent” should be: ie which parent will the kids live with?  The Court will also decide how much “access” the “non-custodial parent” should have with the children: ie when and where can they other parent see the kids?
This is a legal dispute between the two parents; the children are not “parties” to the legal proceeding.  This can often be frustrating for children, especially older children, who may have strong views and want their voice to be heard by the Court.  However, the Court may request to have the children be appointed a lawyer from the Office of the Children’s Lawyer. This does not happen in all cases, but when it does happen the children’s lawyer will present independent information to the court about the children’s views and preferences relating to the custody and access disputes.
For more information on the Office of the Children’s lawyer, check out their website:
http://www.attorneygeneral.jus.gov.on.ca/english/family/ocl/
Some more online legal information on family law:
http://www.cleo.on.ca/english/pub/onpub/PDF/family/getdiv.pdf
http://www.cleo.on.ca/english/pub/onpub/PDF/family/custody.pdf 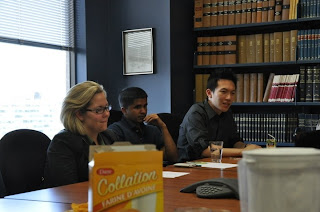 Ouran Li is a volunteer on JFCY’s Public Legal Education Team, shown here on the right at a recent meeting.  He is a Law Clerk student at SenecaCollege and the newly elected President of the Legal Studies Student Association at SenecaCollege (LSSA) which provides a pool of volunteers from the Paralegal and Law Clerk to Legal Organizations which need them.
JFCY Home