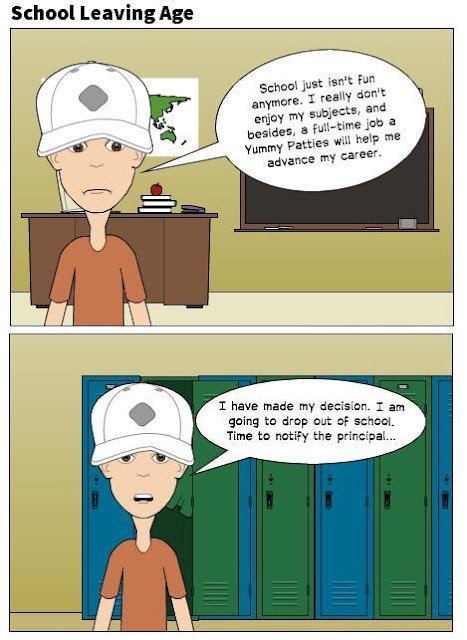 Walter is currently 15 years old and is just finishing up Grade 10, his second year of high school. He dreams to become a chef one day, and so he currently holds a part-time position working after school at Yummy Patties; a local burger joint where he flips burgers and makes some much needed cash. He finds his job very rewarding because he works with some great people, has a very understanding manager, and sees this opportunity as a building block in his aspiration to own a restaurant in the future.

Not only that Walter’s employer Yummy Patties could also be charged for employing Walter during school hours. He could be asked to pay a fine for up to $200. See section 30(3) of the Education Act below:
Section 30(3): Anyone who employs during school hours a person required to attend school under section 21 is, unless the person is sixteen years or older, guilty of an offence and on conviction is liable to a fine of not more than $200.
In 2006, Ontario introduced Bill 52, “The Learning to Age 18 Act”, an act to amend the Education Act, which stated that changed the laws related to penalties for being out of school so that they applied to youth until the age of eighteen. However, while this bill was successfully passed in the Legislature it has not been made law.
If this is something that Walter really wants to do and he waits until he is 16 or 17 before he drops out of school, then he is technically breaking the law however, at this age neither Walter, his employer or his parents will be charged with an offence.
This blog scenario was written by Georjo Tabucan. The legal content of this blog post was written by Lauren Grossman, a first year law student at the University of Toronto who is volunteering at JFCY through her law schools Pro Bono Students Canada program. All legal content was reviewed by a JFCY staff lawyer.