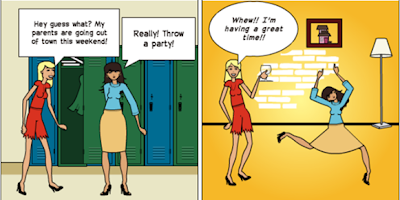 Bianca’s parents are going out of town this weekend and with a bit of convincing from her friend Hailey she decides that she should throw a party Saturday night. Hailey even promises that she can get the alcohol for the party; she assures Bianca that her older sister will make an LCBO trip for them since they are underage.  When Saturday rolls around its finally 9pm and people are starting to show up, Bianca is really excited but a little nervous wondering if people are going to come or not. The doorbell rings, she grabs a beer and runs to the door to let her friends in and start the night off.  Although the party had good intentions, it didn’t turn out so well. Hailey had brought alcohol, keeping to her promise that her older sister would buy it, so there was a lot of underage drinking. One girl at the party had too much to drink and fell down the stairs, hurting herself. The party started to get out of control when some boys moved the party outside the house and damaged the neighbour’s fence playing a game of who could punch through the fence. Due to the noise and people coming in and out of the house, Bianca’s neighbours got very angry and went to check out what was going on. They saw their damaged property and the underage drinking and threatened to phone the police…
What could happen to Bianca, Hailey and the rest of their friends at the party if the police show up?
Underage Drinking:

Section 30(8) of the Liquor License Act says that no person under nineteen years of age shall have, consume, attempt to purchase, purchase or otherwise obtain liquor.  Anyone at the party that has consumed alcohol and is under-age can be charged under the Liquor Licence Act and be made to appear in Provincial Offences Court.
If the police find out who supplied the alcohol, Hailey’s sister could be charged under s.30(1) of  the Liquor License Act with knowingly supplying alcohol to minors.
Injury and Property Damage:

Regardless that they were out of town and unaware of the party, Bianca’s parents could face a lawsuit in civil court brought by the girl who was injured on their property as a result of the alcohol available in their home.
Additionally, if the neighbours decide to sue in civil court for the damage done to their property, Bianca’s parents might be held responsible and forced to pay if a court thinks they should have provided more supervision.
Lastly, the youths who were involved in creating the damage could be charged with mischief under the Youth Criminal Justice Act for their actions.
Noise Complaint:

Most municipalities have noise bylaws that give law enforcement the authority to address noise complaints. These bylaws cover activities such as loud parties, yelling, shouting, and playing loud music. According to the Municipal Bylaw of Toronto, s.591-2 says, no person shall make, cause or permit noise or vibration, at any time, which is likely to disturbthe quiet, peace, rest, enjoyment, comfort or convenience of the inhabitants of the City. Bianca may face a fine for violating this municipal bylaw.

If you are have specific legal questions about these topics, please contact Justice for Children and Youth if you are under age 18 and live in Ontario, Canada.  416-90-1633.
This scenario was written by Genevieve Pelow  a JFCY volunteer on the PLE team. The legal info was written by Lauren Grossman, a first-year law student at U of T who is volunteering at JFCY through her law school’s Pro Bono Students Canada program. All info was reviewed by a JFCY staff lawyer.
JFCY Home