Posted on October 12, 2012
Scenario
Alexa is 17 years old and she lives with her mother as well as her little brother who is 3 years old. Her mother has been struggling financially ever since her husband left her and her two kids. Alexa is stressed out about her current living situation; she has tried to find a job to help out her mother with bill payments.  Unfortunately, she has not been able to keep a job due to some issues she is having with depression and anxiety. 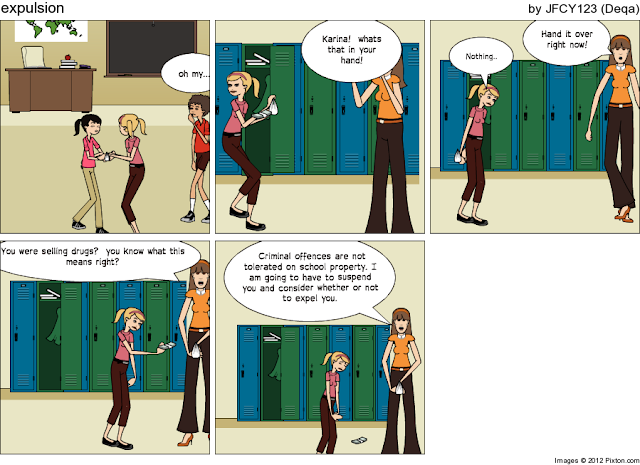 Alexa has turned to other means of making money. Alexa began hanging out with a new crowd of friends and these friends have had some negative influences on her. At their suggestion, Alexa started dealing and selling around her neighborhood, as well as at school. Her ‘new friends’ have convinced her that selling drugs is a quicker and easier way for her to make money for her family.
If Alexa is selling drugs at school, what kind of trouble could she get into with school?
The Law: School Suspensions and Expulsions
If Alexa is dealing and selling drugs at school, she will face a mandatory suspension. According to a provincial law called the Education Act, selling drugs at school is such an incident where Alexa’s principal shall suspend her. Suspension from school can be anywhere from one school day to 20 school days. During this time, Alexa will not be able to attend class or participate in any school-related activities, such as field trips or sports games. If her suspension is for five days or more, she must attend a suspended students program.  If suspension occurs, her principal will follow up with a written notice of suspension stating why she is being and for how long the suspension will last, information about the right to appeal and whether they are considering expulsion.
Importantly,her principal may also have to notify the police about Alexa’s behavior.
Expulsion is a possible and more serious repercussion of selling drugs at school. If Alexa is suspended for 20 days, then her principal must consider whether to seek an expulsion.  In doing this, he or she will conduct an investigation for expulsion following the mandatory suspension. Until investigation, Alexa will be suspended for 20 days and she will be referred to a suspended students program which she will have to attend during investigation. Following the investigation if the Principal is recommending an expulsion then an expulsion hearing will occur where a committee of school board trustees will make the final decision about whether or not to expel her. At the expulsion hearing, the committee will hear from both the principal and the student, as well as any witnesses that either the principal or the student call.  The principal will likely have a lawyer and the student also has the right to have a lawyer present at the hearing.
The school board is required to take into account any special circumstances Alexa may have when determining whether she should be expelled, such as her disciplinary history at school, her academic and attendance record and whether she has a disability that contributed to the misconduct.
Expulsion means that Alexa can not attend school or any school-related activities.
There are two types of expulsions: She may be expelled only from the school she was attending or she may be expelled from all schools in her school board district. If she is expelled from her school only then she will be placed at a different school.  If she is expelled from all schools in the board then she will be assigned to an expelled students program, which she must complete before returning to a different school.
This expulsion will be recorded in Alexa’s Ontario Student Record and other schools will have access to this information. Some consequences of an expulsion include falling behind in classes, not earning her expected credits, being viewed differently by her teachers and peers and not graduate on time with her classmates.
For more information on school suspensions, see: http://jfcy.org/PDFs/Suspensionseptember2012.pdf
For more information on school expulsions, see:
http://jfcy.org/PDFs/ExpulsionSeptember2012.pdf
If you are a young person attending a publicly-funded school in Ontario and you are facing a suspension or expulsion, you can call JFCY at 416.920.1633 or 1.866.999.5329 to speak with a lawyer.
The scenario for this post was written by Deqa Abdi, a JFCY volunteer on the PLE Team.  The legal info was written by Lauren Grossman, a first-year law student at U of T who is volunteering at JFCY through her law school’s Pro Bono Students Canada program. All info was reviewed by a JFCY staff lawyer.
JFCY Home