Posted on December 17, 2012
This is Part One of a three-part series on the law around novice driving and graduated licensing in Ontario.  This comic was created by JFCY PLE Team volunteer Tony Young, a grade 12 student at Bayview Secondary School. 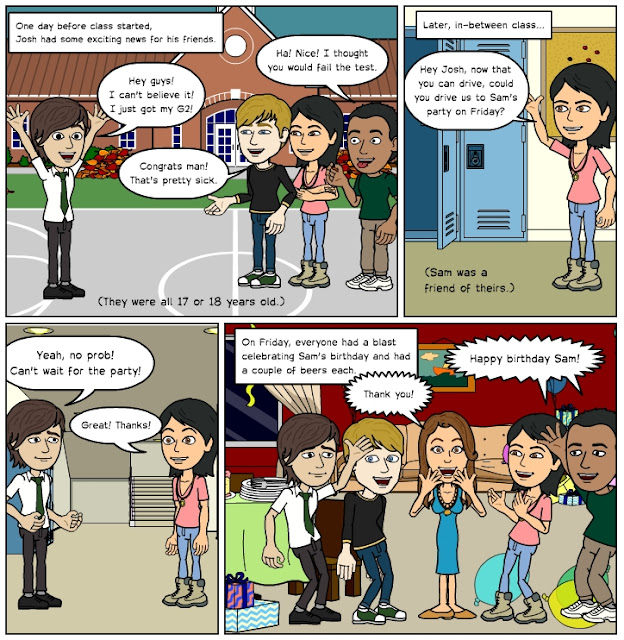 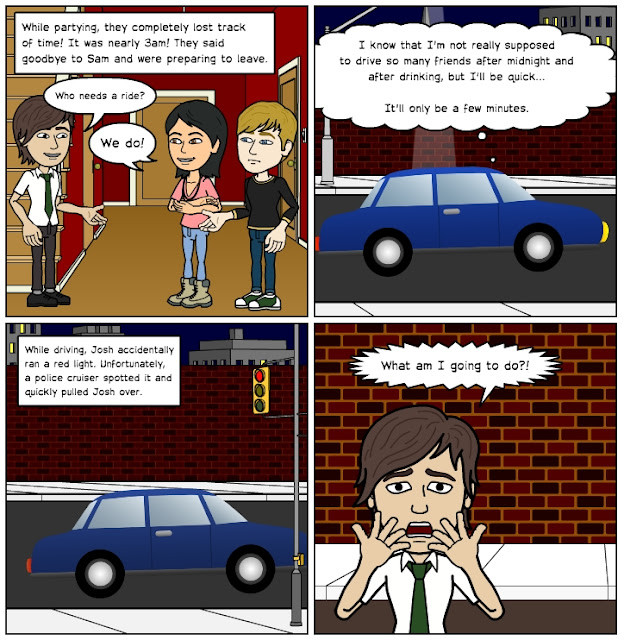 Since Josh is a novice driver and under the age of 21, he can face legal penalties as a result of violating the rules of Ontario’s Graduating Licensing System, as well as other laws.   Here is a quick summary of some the charges that Josh could be facing.  For a full explanation of the law, please stay tuned later this week to Part 3 of this blog series.
1) Because Josh drove while having alcohol in his system, thus violating the Highway Traffic Act law that says novice drivers under age 21 cannot have ANY alcohol in their system while operating a motor vehicle.
2) Depending on the level of blood alcohol in his system and his level of impairment, Josh may have committed the Criminal Code Offences of ‘driving with a blood alcohol concentration of more than 0.08’ and ‘driving while impaired by alcohol’.
3) Because Josh is under age 19 and has had his G2 license for less than six months, he was not supposed to drive any passengers between midnight and 5am (unless the passenger has their Glass G license), thus violating the Highway Traffic Act.
4) Josh ran a red light and could be charged with an offence under the Highway Traffic Act and/or Criminal Code.
5) Josh consumed alcohol while under the age of 19 and thus could be charged under the Liquor License Act.
To see a related scenario, click Part 2. For a full explanation of these laws, see Part 3 of this blog series.
The above comic was created by JFCY PLE Team volunteer Tony Young.  Legal info by JFCY.
JFCY Home