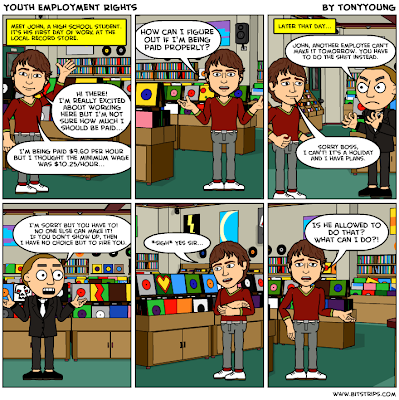 The Employment Standards Act (ESA) sets out the rights and responsibilities of both employees and employers in Ontario.

According to the ESA, young workers have the same rights as other employees in most Ontario workplaces. It is important to know that the minimum age for working in Ontario is 14 years old in most types of workplaces.

Regulations specify higher minimum ages for certain types of work and workplaces. For example, working in the kitchen at a restaurant requires you to be at least 15 years old. You also have to be at least 15 to work in laundries, shipping and receiving areas in grocery stores, automotive service garages, produce and meat preparation areas, and warehouses.

As long as John is above the age of 14, he will be legally allowed to work in the record store.

Minimum wage is the lowest hourly wage an employer can pay employees. Employers must pay most employees, including young workers, at least the minimum wage.

As John is a high school student and working during holiday time, his employer will have to pay him student minimum wage.

This is John’s situation and $9.60 is the minimum amount he should be paid for each hour he works at the record store. John’s employer is paying John the appropriate, legal minimum wage for his age and the hours he works.

If John decides to take on more hours during the school year, $10.25 is the amount that John should be paid per hour.

There are some exceptions to the minimum wage requirements:

The Right to Refuse to Work on Public Holidays

This blog scenario was written by Tony Young, a volunteer on the JFCY’s PLE Team. The legal content was written by Lauren Grossman, a first year law student at the University of Toronto who is volunteering at JFCY as the PLE team leader through her law school’s Pro Bono Students Canada program. All legal content was reviewed by a JFCY lawyer. JFCY’s legal content is based on the laws in Ontario relevant to youth under the age of 18.