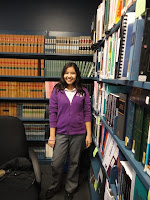 Yasmin is a grade 10 student in Toronto and a volunteer member of JFCY’s Public Legal Education Committee.  She has written a blog on bullying.
Consider Yasmin’s scenario:
Harry’s books were once again knocked out of his hands. His heartbeat sped up and his palms became slippery with sweat. “Move, this hallway isn’t for losers,” Tom sneered at Harry.  Harry was pushed aside roughly as Tom pushed past him.  Tom walked a couple of steps before turning back. “I better not see you in this hallway again or else…” Harry’s stomach filled with dread…what was he supposed to do?
Harry decided to ignore Tom’s threats, it’s not like he would go through them, right?
Harry got home that day and checked his Facebook account, waiting for his cousin Phil to come online. With a sense of dread Harry noticed that Tom was online. The chat bar opened.
Tom: “You’re such a loser Harry, no wonder you don’t have any friends. Why don’t you just help us all and not show your face around school anymore.  Otherwise, there could be trouble for you…”
Harry logged off after reading Tom’s message. He didn’t want to be scared anymore, he felt that he had to do something. He decided to tell someone.
The next day Tom was called to the office by his Vice-Principal, Mr. Vandelay, who said:
“Tom, Harry has been telling me that you’ve been bullying him inside and outside of school. I’m going to have to suspend you…”
Legal Information on Bullying from JFCY:
Here is some general legal information about bullying.  For specific advice, contact a lawyer!
Education Law Issues: Students have the right to feel safe at school and learn in an environment that is free of harassment. As a result, school principals have the legal power to impose discipline on students who bully other students, teachers and school staff. Sometimes students who bully others can be suspended or expelled for their conduct.  Bullies can sometimes be disciplined for conduct that takes place away from school—such as online on Facebook—if there is evidence that the conduct makes another person feel unsafe at school or otherwise impacts the school climate.
Criminal Law Issues: In most cases, school Principals will contact the police if the bullying involves violence or a threat to the safety and security of the student or others at the school.  Bullying can sometimes lead to criminal charges, such as assault, uttering threats and criminal harassment. Sometimes the criminal charges can lead to a situation where the police and/or the Court will prohibit the bully from going back to the school. This can sometimes be the case even if the bully was not suspended or expelled.
If you are a youth and require more information on legal issues relating to bullying, school discipline and criminal law, please contact JFCY at 416.920.1633 or toll-free at 1.866.999.5329 to speak with a lawyer.
JFCY Home